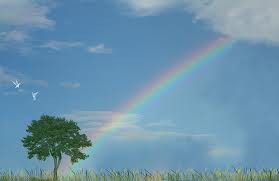 It’s been raining here in Kansas City. Some of my friends were lucky enough to catch glimpses of rainbows streaked across the sky, reminders of God’s covenant with Noah. I wish all covenant reminders were so beautiful.

I came across a passage in the Bible that talked about a more gruesome covenant symbol that is not preached nearly as often as it should be. Genesis 15 talks about the cutting of covenant. It is a ritual in which animal sacrifices are made and the pieces are then split in two. The two parties then walk between the pieces, acknowledging that if one of them breaks their word, that they should die, just like the animal sacrifices that lay on the ground.

Imagine, the bloody carcasses lying on the ground. There would be scavenger birds flying over head. The stench of rotting flesh would fill both parties nostrils as they stepped between the pieces. This would be bond of blood and bone.

But here’s the interesting thing about this covenant ritual. Commonly, both parties were to walk among the pieces, but Abram is in a deep sleep. He doesn’t take any steps. Nor, is he required to make any pledges. Instead, a smoking oven and a burning torch pass between the pieces, and God promises to give Abram descendants and land.

It is a one-sided covenant. We have often forgotten that God’s love for us, God’s delight in us, is undeserved. He only asks us to sacrifice what he’s already given us, and he, alone, walks amongst the broken pieces.