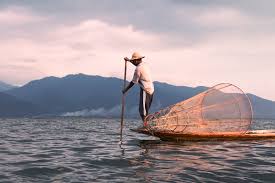 I listened to a message from Elevation Church today that really struck a nerve with me, in a good way. The man giving the message was talking about the idea of fishing for men, specifically where Jesus meets Peter in the fishing boat when they haven’t caught anything all night. Jesus tells them to cast again and their nets are so full that they are almost breaking. Immediately the men leave all of their things and follow after Jesus. The gist of his message was that when Jesus told them that they would be fishers for men, it also had another connotation.

Everything that happens in our lives is not for us. It is for others. See, because of the hardships that we have had, because of our issues, we can relate to others. We know what it is like to not have enough, or to cry out to God and not feel like he heard. We know what it is like to struggle. So when we meet people who need encouragement, we can offer more than Christian tropes and other empty, but well meaning, words. We can give encouragement based on a life lived through the season that someone else might just be entering into. That kind of testament is what really draws people. And if God is the fisherman who throws us out into the world to live, as the bait, we get the awesome opportunities everyday to be an up close part of what He catches by His Spirit. It is an endlessly cool honor.

So, I guess that I’m saying is that we should not disregard the hard seasons, the questioning seasons, the challenging seasons, because the outcome of those seasons will be seen in the lives of other people. We get to help others endure because we endured.