I was listening to On One with Angela Rye the other day while making the run from Abilene back to Lubbock when something she said hit me like a ton of bricks.”We need to be better with our messaging with our fellow Americans.” She ain’t lyin’, she ain’t lyin’! So when I saw this story recently about a Jimmy Kimmel segment involving a DACA family and MAGA supporters I thought this would be a great opportunity to refine the message so that perhaps we could turn a loss into a work in progress.

Link to Story About MAGA vs. DACA

The basic take away message I saw from this story is that while most Americans support DACA, a verbal majority do not and that makes us a heartless nation.I submit to you that this is an example of messaging that won’t get us where we need to go as a nation. This messaging evokes emotionality and has an uncanny knack for shutting off the reason centers of people’s brains. Don’t believe me? Well then let me ask you this: When did the average American become grossly interested in American jurisprudence (fancy word for “the law”)? I hear so many positions (I can’t dignify them as being arguments because there’s nothing behind them) stating that those who had legal protections under DACA are breaking the law so they should be sent back to their country of origin.

If you’d like a quick list if DACA facts I recommend you check out this Newsweek article. For now, I am going to dig into a few points.

Let’s look at this rationally for a moment and get straight something very important that gets lost in this big scary acronym.DACA stands for:

So let us be clear, when you’re talking about sending these folks back to their countries of origin, some of the folks you are talking about were born right here on U.S. soil. The others were brought to this country as minors. Also, part of the title let’s you know that the program creates a fixed period of time for those residents to pursue a LEGAL path to permanent citizen status. It is not a free pass and it is not an easy process. Have you ever taken an American citizenship test? (Civics class doesn’t count.)

Three of my favorite stats regarding Dreamers are:

In a Center for American Progress survey of roughly 3,000 DACA recipients, nine-tenths (90%) of respondents said they had jobs.

Soooo…that means Dreamers aren’t draining resources, they are actively contributing to the workforce.

The Center for American Progress estimated also that the U.S. would lose about $460 billion in GDP over the next 10 years without DACA.

But then again, what’s a few hundred billion dollars for an American…oh wait… For a little perspective, the current annual “budget” for the Department of Defense is about $574 billion.

Approximately, 700,000 people could lose their jobs if DACA is ended.

Have we thought about what kind of drain and strain that will put on our resources?

One of the other things that I think gets lost in this conversation is that we are not only talking about illegal immigration of Mexican citizens to the U.S. 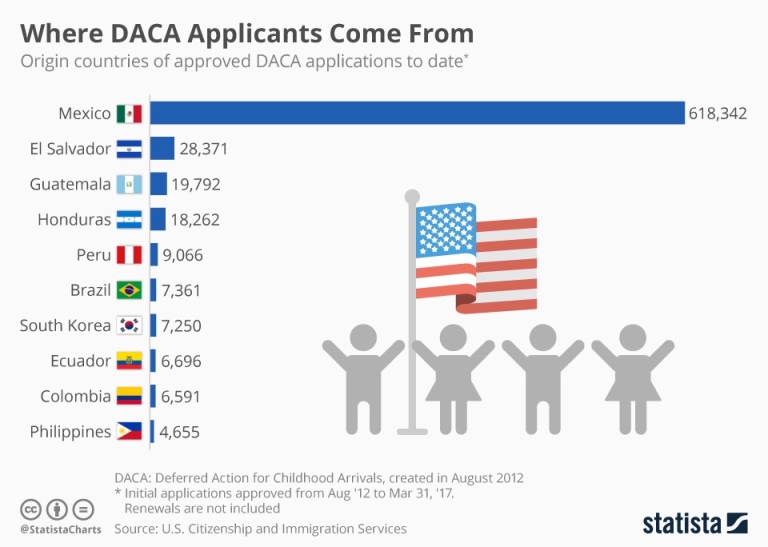 Part of the problem here is how long it takes for us to explain the justification for DACA so let’s try it this way.

FACT: DACA gives illegal residents younger than 36 years of age a small window of time to apply for full U.S. citizenship. This is called “deportation relief”.

FACT: A lot of people are still going to get deported despite DACA.

OPPORTUNITY: Instead of spending money on a wall, perhaps those funds would be better spent in creating programs and policies to facilitate the safe and legal immigration of U.S., Mexican and other applicable citizens that supports the interests of these nations.

Marta C. Youngblood is a writer, education and social entrepreneur based in Lubbock, Texas. For more information on her current projects visit https://about.me/MCyoungblood.

One thought on “Mondays With Marta G. – MAGA vs. DACA”