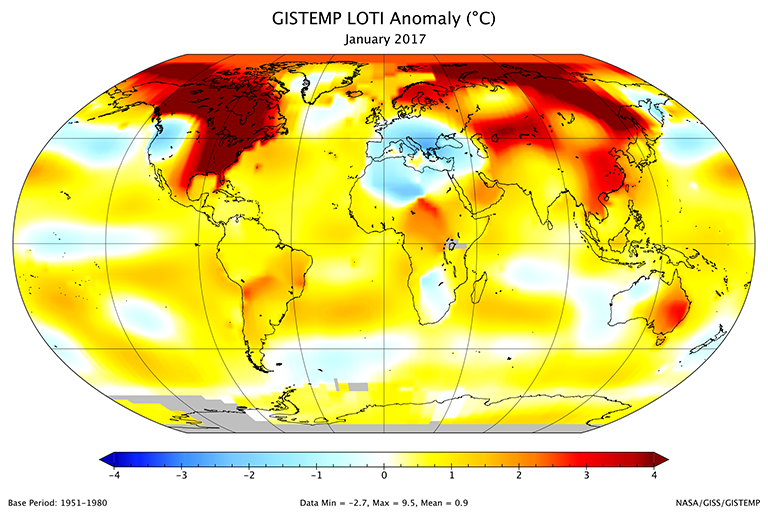 The above image is from  NASA’s Goddard Institute for Space Studies.

Well, if there was any doubt the United States of America is being lead by someone who is not living in the land of reality, the actions of June 2, 2017 when President Donald Trump withdrew the United States from the Paris Agreement confirmed it.  The following information that I am going to share with you is from the Earth Science Communications Team at NASA’s Jet Propulsion Laboratory | California Institute of Technology;  https://climate.nasa.gov/effects/   Site Editor: Holly Shaftel; Site Manager: Randal Jackson; Senior Science Editor: Laura Tenenbaum.  Site last updated: June 1, 2017.

“Global climate change has already had observable effects on the environment. Glaciers have shrunk, ice on rivers and lakes is breaking up earlier, plant and animal ranges have shifted and trees are flowering sooner. Effects that scientists had predicted in the past would result from global climate change are now occurring: loss of sea ice, accelerated sea level rise and longer, more intense heat waves.”

Below are some of the impacts that are currently visible throughout the U.S. and will continue to affect these regions, according to the Third National Climate Assessment Report2, released by the U.S. Global Change Research Program:

Northeast. Heat waves, heavy downpours and sea level rise pose growing challenges to many aspects of life in the Northeast. Infrastructure, agriculture, fisheries and ecosystems will be increasingly compromised. Many states and cities are beginning to incorporate climate change into their planning.

For those of us who are over 40, we know that there are drastic changes taking place in the environment locally and worldwide.  It is up to us to take these issues seriously and make changes that will make positive advances in this battle against global warming.  Many of us don’t have finances to move from one country to the other so we must take care of the place we call home.   Go to  http://www.nationalgeographic.com to see how the Paris Reversal isolates the United States from the rest of the world.

Get the children involved.  Go to https://climatekids.nasa.gov/how-to-help/ for more information.