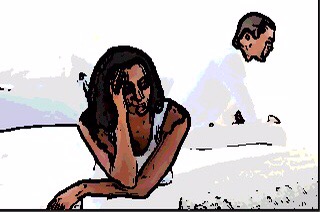 Ndidi could not believe what she had just seen during the sharing. Staring into the unflinching eyes of Ro she could see reflected there a pain the dug down deep into her soul. The cold, bitter wind at her back, she tried to move closer to him but stopped her forward motion when he raised his hand and shook his head slightly. She felt her stomach tighten violently and in the next instant she found herself double over and surrendering the full contents of her stomach onto the hard, crackled earth beneath her feet.

A woman she had met earlier that evening appeared at her side with a rough piece of burlap sack in her hand and extended the fabric to Ndidi once it appeared that the last of the meager rations she had eaten earlier had ceased their outward motion. She then heard Ro’s voice from nearby float through the air and snake into her inner ear.

“Did you really not know?” he asked. These memories are imprinted on every member of those in the genetic lines of The Order in preparation for their time as the protectors of the Nise. Once we were cut off from most forms of electricity, one of our number from the Tis Issat GenCode developed a way for us to tap into the electrical charge created when our atoms switch charges. It takes practice but all humans can do it. This electricity allows us to pass large amounts of data from one person to another in a matter of seconds like a high speed download with super boost as they might have said in the old days. I just attach the data packet from my brain (that’s the collection of memories that need to be shared) to the outgoing electrical charge and then I initiate physical contact with my intended receiver. This is The Sharing. It is one of the tools that helps us survive in this wilderness. Is this not a common practice where you come from?
“Touching between two or more people is heavily monitored where I come from. We must file for permission to initiate contact. I didn’t know there was ever a place or time when people could initiate physical contact without a permit,” said Ndidi.

“I suppose that’s just one more thing to add to the list of things that have been kept from you, Firsty,” said Ro just before making a unflattering noise and spitting the contents of his mouth out onto the ground. He turned and walked away into the nearby thicket growing smaller and smaller until Ndidi lost sight of him as his shape blending into the tree line and disappeared.

Let me know what you think so far. I love getting feedback from my readers during my process. I’ve got two more excerpts to share before the end of November and then it’ll be time for me to lockdown and work on edits to my NaNoWriMo 2016 project!