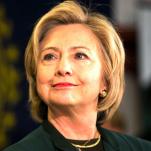 Neither candidate is trustworthy.  Both have said things that have offended more than one ethnicity.  Neither have a presidential platform that is original.  Let me be fair though.  At lease H. Clinton has a platform that addresses world issues.  The media and pundits are saying that Clinton needs to woo the white male voter and Trump needs to woo the non-Caucasian voter. Neither are doing such a good job accomplishing this task.

At one point, there seemed to be a glimmer of hope in that we had Bernie Sanders.  I voted for him because he was a breath of fresh air in the foul smelling room of politics.  I wish that Sanders was in his early 60’s and did not have difficulty hearing.  He had some ideas that were practical and not condescending.  But alas, we are stuck with the true example of “the ugly American” in Donald Trump.  His platform is fear and hate which will bring about more murders. He wants to build a wall to keep people out that will not benefit him financially.  His children will be on the “board of directors” that will run this country.  Basically, we can kiss democracy goodbye should this country foolishly bring about a Trump presidency.  OTHER COUNTRIES HATE HIM.  They already hate the U.S.

On the other hand we have Hillary who has messed herself up with “EMAILGATE.”  So what that she used her personal email for government things.  I am certain that a lot of politicians do that.  It is the fact that she lied about it is what got her in hot water.  She also seemed to forget that people have long memories.  President Obama may have forgiven her for the HORRIBLE things that she AND HER HUSBAND said about him but many Americans didn’t.

This race boils down to the lesser of two evils.  Which devil will do the least harm?  Many children no longer say that they want to grow up to be president because of what the adults have done to the office.  I love this country but the politics SUCK!!!

Try to have a fabulous Funkadelic Friday.