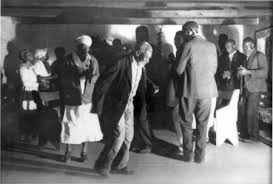 This morning the church full of people praising God. The organist is playing some filthy riffs while shaking his head and scrunching his face up. The Deacons are in their black suits. The ushers have their white gloves on. The church mothers have on white, and are sitting on the front row, all with their hands raised. The church is hot and stuffy, but nobody notices, because the activity is so high. The “Preacher” stand up in the pulpit and surveys the crowd. As he opens his mouth to speak. a hush comes over the entire church, as they anticipate what he has to say. This old preacher opens his mouth, and at first the words seem to be caught. He knows his church. He knows his people. He knows his community. He knows what Mrs. Thompkins has had to deal with in her lost son, Junior. He knows that Mr. Bishop just got laid off. He knows that Ms. Broadmore’s fiancee, Tommy was kidnapped by some men in white hoods, and despite their best efforts, no one has been able to locate him. He sees the burning crosses. He knows this people. He knows that they need.

He clears his throat. In a gravelly voice, echoing the hurt and pain, but also the hope and promise of a new day, and faith in an all powerful God, he says,

Voices begin rising from the pews. Several parishioners can be heard stifling tears. the organist’s chords are  minor and diminished now. Then the preacher continues, wiping his mouth with his handkerchief.

A few members in the back of the church stand up, hand’s clasped and tears running down their faces. They know…

The preacher goes on,” If we will just WAIT…God has promised that He will renew our strength. Because no matter what Satan tells you, there may be pain in the night, but as sure as the sun rises, JOY cometh in the morning! I come here to tell you that it is God himself who installed the patterns of the day and night. Sometimes the night is going to seem long when we are worried about our loved ones. Sometimes at 1a.m., and 2a.m., and 3a.m., and 4a.m., we fret, because the skies show no sign of anything but darkness!…”

Several more people stand up, hands raised. They know what is coming. The organist’s notes are not a bit more frenzied…restrained, but fighting at its bindings. A release is coming. It won’t be long now.

“but at around 5a.m. on the east coast”, the preacher says with a bit of a laugh, and his voice rising, “God ordained at creation that the earth would revolve in such a way that the sun would begin peaking over the horizon. Morning WILL come! And just as it is natural that the sun rises and a new day begins, so it is also mandated that in YOUR life, that time of midnight can NOT last forever. Morning is coming. Joy is coming. Joy, that the world can’t give to you. Joy, that the world can’t take away from you! JOY that is a fruit of the Spirit of God. JOY that lifts your heart. JOY that renews your strength. JOY that tells you that toy CAN, you MUST, you WILL go on! It’s all about JOY, church!”

By now his voice is quivering. Tears that he tried to hold back, now flood his eyes, and he allows them to flow unabated, because that morning his wife had died. She had passed away peacefully in her sleep. Joy is here. Nobody here knew, because he couldn’t bring himself to tell them when they deal with so much from the world already. Joy is here. He looks at his people. The church is loud again. it is louder than before. The organist’s head is tilted back and his mouth open as he screams to the God who hears him. His fingers run and sprint up and down the keys, adding to the frenzy of the moment. The congregation is erupting in dance. Shouts. Wails. People are holding their neighbors up. Joy is here.

Then the old preacher looks up and notices for the first time that the back doors of the building have been opened. He sees a community of people standing just over the threshold, and two ushers looking to him for guidance. The old preacher wipes his eyes, and walked slowly through the holy chaos to the back doors and steps outside. No less than 50 people await him, all in varying degrees of grief. Children, mothers, wives, fathers, sons. They are looking for something.

The preacher holds out his hands, and in a voice stronger than he thought it could be in that moment. He embraces the first person. He doesn’t know if it is a man or a woman, but he hugs and holds them all. As the people in the church continue thanking and praising God, the preacher holds a quiet, worshipful moment with the crowd outside of it, and with each hug, each handshake, he repeats to them, and also for himself,