“Shattered Mask” will conclude on next week.

In the meantime, please enjoy an excerpt from my debut novel Love Over Logic. 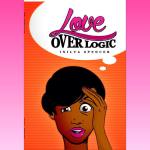 Nick hadn’t seen or spoken to Nadine since she found out he was getting married almost two years ago. Thanks to his mother (an unwilling and oblivious accomplice) and the internet, he was able to follow Nadine’s burgeoning career. When he learned that his company was looking to tap into a new demographic, he used his charm to pitch Chase-Lockhart. Then begged, borrowed, and dealt his way into the position. Any one of his subordinates could have performed the job but he managed to discourage them from volunteering so that he would be “forced” to get it done.

He hoped that he and Nadine could at least be friends again. He looked at his left hand.  Nick wasn’t married long enough to even get a tan line. After four months, Laura decided that marriage wasn’t for her. Nick awoke one morning to see divorce papers attached to a “Dear John” letter in the bathroom they shared. She hadn’t given him the courtesy of a face to face dismissal but promised to take only what she had brought in to the union if Nick promised not to contest. He had to admit it was devastating. He was still a member of the church they had joined as a couple but stopped attending the services not long after the divorce was finalized. When one of the members called to check on him, Nick knew he needed a change. He needed his friend. He needed to tell Nadine how sorry he was.

For the first time in a very long time, Nick felt like he had something to look forward to. The closer the move date came, the happier he was. It was only when he had seen the look on Nadine’s face that Nick wondered if coming to Memphis was such a good idea. He knew Nadine would be shocked, maybe upset at seeing him but to see the hurt in her eyes before she fainted was more than he could handle.  There was so much for them to talk about. Nick pulled out his laptop computer to send Nadine an email. He logged in to the account and clicked on the create button. What would he say? What could he say to erase the image of Nadine falling? He reached for her, catching her before she hit the floor, then moved out of the way before she came to.

Nick’s thoughts were interrupted by his ringing cell phone. He looked to see who was calling.

“Hello?” he answered in a flat voice.

“Yep,” Nick replied. He wouldn’t give Laura the satisfaction of explaining that it was temporary. Why did she care where he lived?

“I was calling to say hello,” she continued.

Silence. Nick didn’t want to be mean but he just couldn’t see the point of this conversation.

He could tell Laura was caught off guard. He expected her to argue or to woo him into a conversation but she didn’t.

Nick ended the call without saying anything. He looked back at his un-composed email. He tried to put himself in the position he’d put Nadine and began typing:

It must be a shock to you seeing me again after all this time. I was hoping that time heals all wounds. But, I guess some wounds are deeper than most. I should have told you about me and Laura, but I was so afraid of hurting you. It’s probably too little too late, but I was trying to protect you. My actions didn’t show it very well but I did love you Nadine. I think that a part of me still does. Believe it or not, I know how you feel. Laura left me after four months of marriage. I guess you reap what you sow, right? If working with me is going to be difficult for you, just say the word. I’ll contact my company and they’ll send someone else. I’ve caused you enough hurt and I don’t want to do that anymore. But I was hoping that we could become friends again. Only if and when you’re ready.

He pressed the “send” button.

Nadine’s notification beeped for the umpteenth time. She now regretted syncing her business email address to her cell phone. She checked the phone and saw that the newest message was from Nick. She was in her kitchen preparing dinner and trying to decided if she wanted to be sick again tomorrow. Nadine had called in today and she knew that she couldn’t hide forever. Perhaps this email would help her decide. She opened the message and read it. So Nick wasn’t married anymore. How is she supposed to respond to this? It would certainly serve him right if she did tell him to pack up and go back to Cincinnati. Do not repay evil for evil. Nadine sighed as she remembered a scripture she had memorized during her Vacation Bible School days. Now was not the time to remember the map to the high road.

She put the phone down and continued making her dinner. Nadine hated cooking but she had fallen into an awful dine and dash pattern. With all of the delicious culinary options Memphis had, she would have ended up fat and broke. Nadine decided to eat the boil in the bag rice and Foreman grilled fish at the table. She set up her laptop replying to most of the emails she’d received while out. She skipped the one Nick sent her  but the words often interrupted her thoughts. By the time she was finishing up her phone rang. Why won’t he just leave me alone?

One thought on “We Interrupt This Program…”